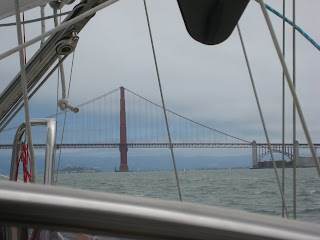 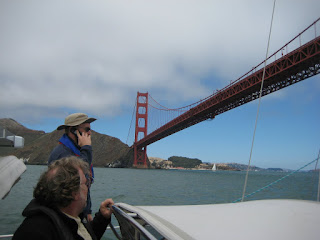 We arrived in San Francisco early this afterternoon and I have to say it is quite the culture shock. Even with our stop over back in Seattle the stark contrast between pier 39 and our 3 months in BC and Alaska feels a bit like being plunked down in the middle of a circus.

We have a birth right smack in the middle of pier 39. As we motored in we passed through a narrow break. I swear I could have rached out and stolen someones french fries. They were that close. There were hundreds of people standing along the pier watching us enter.

I remember being here before and seeing all the sea lions in the marina and thinking it looked prettyy nasty. When we checked in with the harbor master we were told that though the sea lions are not usually terribly aggressive if one is between us and out boat we need to...get this..."grab one of the blue shields on the dock....(a piece of plywood with a couple of handles attached and painted blue) and keep it between us and the lion. If that fails we are supposed to grab a hose and squirt them with water.

It was a wonderful experience coming in under the Golden Gate Bridge. We could see the bridge from miles off and the closer we got the more traffic there was. When we finally entered the Bay there were boats going every which way around us. Cruise boat after cruise boat filled with oodles of tourists. It is all really quite stunning.

We plan on staying two nights and then will be off towards the Channel Islands.
Posted by Bill and Kat Russell at 2:49 AM