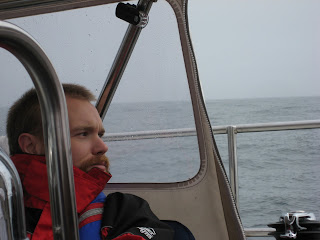 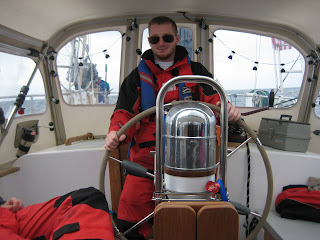 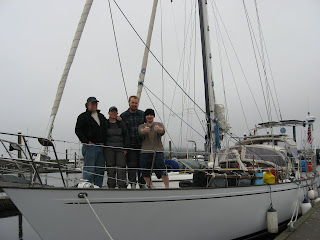 We have been underway for a little of 48 hours and have come roughly 240 nm. Not close to breaking any records but we are about midway down the Oregon coast and should hit California sometime after noon tomorrow.

Our first day out we were lucky on several front. Comfort wise the most important was that we motored away from the drizzle in Neah Bay. As we left Neah Bay it looked like it was going to be a wet one but not only did not a drop land but as the day rolled by the blue sky came. The crew met each small patch of blue sky with enthusiasm and high hopes for more.

Then in the afternoon we began to see humpbacks. For Bill and I whales are all a part of a day at sea but for Ryan they were his first whale encounters. Way better than TV! They put on quite a show, tail slapping and breaching and spy hopping right up until they slipped from sight into the fading light. Josh said they were out catching bugs in the evening air.

That first day was spent getting Ryan and Josh familiar with the onboard systems and going over the safety gear and procedures with everyone. This is Ryans first time on a sailboat and he had the first watch so we spent the morning going over the how’s and whys’ of sailing. He is a fast learner, has a great attitude and head full of quick one liners. . The only touchy spot of the day came when Ryan became the first ever person to get physically sick on the boat. It isn’t unusual for a newcomer to get sick right off. We aren’t sure if he was actually sea sick or if he got sick from the “cure.” I gave him a piece of candied ginger and a ¼ of a Sturgeron which promptly made him heave. But he has been fine since then even in some really rolly seas.

Contrary to the forecast day one started with a south wind. As we motored along it slowly clocked around behind us and we were finally able to sail. But the pacific coast weather also brought a NW swell confused by SW waves which left us rocking and rolling for hours on end. Poling out our yankee stopped the flog and bang of the sails but it has been tiring for everyone.

The first nights watch brought dolphins on the bow for Ryan and the first fish on for Bill. Whatever hit the line ran away with one of our new rigs but about 7am on day two Josh brought our first tuna to the boat. He was in the cock pit alone when a 20 pound albacore took a bite out of one of our tuna rigs. Josh easily got him to the boat and expertly bled and fillet him. Seared albacore for lunch and the boys went back for seconds grilled on the back deck after dinner. So exciting to get one aboard in our first 24 hours.

Day three seems to have brought an easy rhythm to the boat. No more heavy roll and everyone has pretty much eased into watch times. The nights get quiet but the days are fleshing out with puttering and visiting, eating, reading and some serious sleeping.

There is a great luxury for me in having a crew. In exchange for only one watch per day it is my job to keep everything neat and clean and everyone well fed. Once out in the great north pacific though the roll canceled out all my Alaska miles and plagued me with a queezy stomach every time I went below. All my cooking and cleaning has been in bursts and spurts then topside for air.

The cooking underway is harder than when we just coastal cruise. Certainly the two days of rolling was difficult but heeled over it is harder preparing for four than for two. My small galley has just so much counter space. Laying out plates to fill and getting everything hot and on the plates instead of all over the floor or the inside of the tilting oven is proving more challenging. I have a harness for cooking but we have not gotten around to placing attachment points for it. Cooking at a good heel is nearly impossible with only one hand. Without the harness I have to hold on with one hand and cook with the other. Plate grab, food scoop, slide across counter grab, grab and catch before it hits the edge. I feel a bit like a bad juggler. The first landfall we will definitely install the harness and a crash bar and when we get to a chandlery I am definitely going to look for some non skid dishes!

Well enough from me for today. Fish tacos for dinner will finish off the tuna so I better remind the boys to put out the rigs again. Maybe this time I will get to bring it in
Posted by Bill and Kat Russell at 3:04 AM