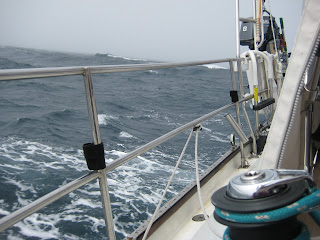 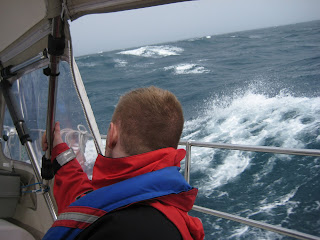 - Or the great North pacific tries to kick our butts!-

Day four brought some serious seas. The forecast was not at all what we received. As we neared Cape Blanco the winds and seas built. By late morning we had 20kn winds with gusts to 30 with a 6-8 foot wave from the north coupled with a westerly swell. By early afternoon we had 30kt winds with gusts to 40 and the waves were now about 12 feet and still burdened by the westerly side swell.

Earlier we had realized we had two battens loose and decided to lower the mainsail to keep from having the battens tear through. Unfortunatly once the main was down and the winds rose we had effectively limited our options. With out a main we can't heave to.

As the afternoon progressed we were running under nothing but our stay’sl and then later under bare poles. As the big waves stacked up behind us they pushed our stern sideways and put us in danger of breaching. Because of the side swell both “Carly” our windvane and “Otto” our autopilot were unable to keep us square on to the big waves so we were forced to hand steer.

It was virtually impossible to stay below so all four of us were in the cockpit with PFD’s and clipped in with our safety harnesses. We lost our salmon net overboard, had a flailing BBQ lid threatening a deep sea escape, the dive compressor on our back deck was shaking loose, our bifold companionway doors kept jumping down below like a deadly projectile and had to be replaced with storm doors. Then “Carly’s” vane was taking a beating and needed to be brought below decks. PLus it turns out that early on before we lowered the main one of our new batten cars had cracked so in addition to two loose battens the car was ruined too.

Many things below deck that seemed tucked in tight turned into projectiles as we rolled around in the unsettled seas. The carpets wouldn’t stay flat when stepped on and it became hard to stay tucked into a corner of the cockpit. Ryan managed to be in the wrong place at the wrong time and took a wet wave at least three times. There was no way to cook and it was difficult just to try and grab some crackers or a piece of fruit.

There were a couple of breaks in the wind but the waves kept on so after hours of hand steering we decided to check the cruising book and charts and see if there was someplace to duck in for the night. Bill began to consider using our storm drogue or laying out a couple of warps of line to slow us down.

Completely unfamiliar with this part of the coast and having planned on a direct shot down to San Francisco we didn’t know if we should risk moving into shallower water for a safe port nearby or if it would be safer to stay in the storm. The crusing books we had onboard didn't actually say “this is a safe harbor to enter in bad weather. We could see that Brookings Oregon was about 3 hours away so looking at our options Bill had me contact the USCG on our VHF. I stood by while they checked conditions and double checked to see if we needed to get under a cable crossing or a bridge the guide mentioned in order to reach the marina.

The USCG was able to report that once we got closer in we would be protected by a small point where the winds currently were virtually nonexistent and the waves would drop to 2 to 4 feet as we entered the harbor channel. They do add the caveat though that entry would be at our own risk regardless of the reported conditions.

By seven thirty we motored into the calm windless marina just past the Chetco River in the Port of Brookings. We were tired and cold and worn out. The day had been stressfull on everyone. Tempers were short and emotions were bubbling. In all honesty I don’t think I was terribly worried. Less worried I think than the captain. He seemed to be especially aware of the added responsibility of having crew aboard. If anything I think he was more conscientious than ever and I never felt scared. I had moments of wondering if I should be scared but felt confident throughout. My only problem was turning my slowly healing tennis elbow (demolition elbow/kayak elbow) into storm elbow from my turn at the wheel while we were forced to hand steer. It is still tender. As soon as we tied up we walked ashore for a quick dinner and I was fast asleep within 15 minutes of returning to the boat.

The next day (Thursday) we spent the day doing chores. I did 4 loads of laundry and cleaned the boat while the guys worked to fix our windvane problems, re-hang the man over board pole, re insert the battens and switch out the top batten car (the short one) with the cracked batten car from the bottom and generally get everything ship shape again. We met several of the locals and found a great little chandlary a few blocks away who were able to set us up with the gear we needed to put up my galley stove crash bar and be able to connect my harness! No more juggling while I try and cook.

Friday morning after visiting at the harbor coffee bar we were off and headed to San Francisco. Yesterday and today we have barely enough wind to sail. So it has been sail, motor, sail, motor….so far we have used 35 gallons of diesel and we are about two days away from SF. Everyone quickly got back into the rhythm of watches and if anything the battle with the weather has caused everyone to redouble their efforts to getting enough sleep. The excitement of the first few days meant we were working with a bit of a sleep deprivation. Not horrible but enough that I think we all realized we needed to be sure to get in the zzzzz’s when we could.

This morning on Josh’s 6 to 10 am watch he hooked another albacore tuna! This one nearly twice as large at close to 30 pounds! Grilled tuna sandwiches for dinner!!
Posted by Bill and Kat Russell at 3:15 AM