5/14 Apache Tears and the Cruisers Shrine at San Juanico 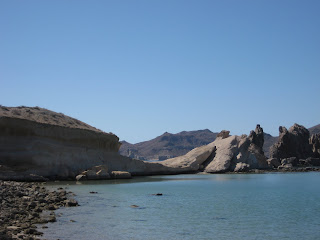 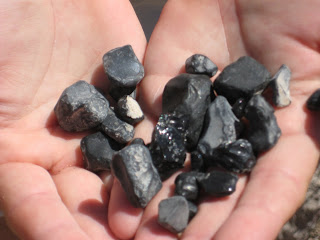 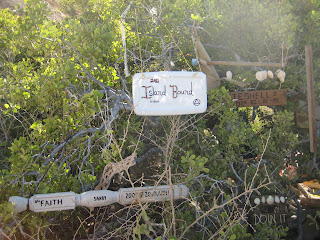 We have spent the last five nights –or is it six? What day is it again? - at San Juanico. It’s a great anchorage, beautiful, safe in most winds, room for plenty of boats and the weather has been perfect. Who could ask for more? We have had beach gatherings, Bocce Ball games, potluck dinners and evening games of Farkle. Saturday night was the last night for several of the boats in the anchorage so we gathered for one last potluck and good bye for the season. The gals decided to turn it into an early celebration of my 50th birthday. They amazed me with some wonderful impromptu gifts, a candle to blow out and chocolates to cap off the meal. The gifts were all tailor made for a cruising woman of “a certain age.” Among the gifts were several that were made to order: a fan to ward off hot flashes, face cream with high SPF to protect my skin, the coveted Mexican brand of high octane insect repellant and its sister product the anti-itch cream. Loving and practical!

This morning we went out fishing again and quickly caught enough for a couple of meals but also spent some extra passes trying to hook one that got away. We were trolling when an eight to ten inch reef fish hit Bills spoon and came flying out of the water. As Bill began to reel him in a huge grouper came up from the depths and swallowed the fish that Bill had on. Unfortunately the light leader he had on was not up to the job and the big guy dropped back into the rocks and quickly snapped the line. I could tell you an “it was this big” story about just how huge he was but since we didn’t actually get him to the boat its purely a fish tale except of course we know he was big enough to make dinner out of the other fish. Darn thing took off with one of our best spoons. Oh well there is always tomorrow.

Shortly after we arrived we went ashore on a quest. First we wanted to be sure to see the Cruiser’s Shrine here in San Juanico. The shrine has been here for years as a way for cruisers to leave their mark on the Sea. A small grove of trees near the northern end of the cove is home to a hodgepodge of signs and offerings. Everything from hand lettered signs, old flip flops, bottles with boat cards inside and even an old pair of cargo shorts inscribed with poetry. Most bear boat names, captain and crew and a date. We paid homage and took lots of pictures but didn’t leave anything to mark our presence. Eventually it got under my skin and I decided it just wouldn’t be right to pass up the opportunity. So this afternoon out came the sign board -a plastic bin lid- some thin nylon rope, a pile of beads, the glue and a magic marker. In no time at all Island Bounds passage through Baja waters was ready to be left for posterity.

We took a hike across a small hillside to the anchorage at La Ramada. It felt good to get out and hike a bit and La Ramada anchorage was perfect for a quick dip to cool us down from the hike. But what I was really interested in was searching for Apache Tears along the dry creek beds and dusty road on the hill. Apache Tears are the smooth glossy stones made of natural volcanic glass that resulted from rapidly cooled lava flows in this part of Baja. The legend of Apache Tears began in the 1870’s when the U.S. cavalry fought against the Arizona Apache. The defeated Apache warriors refused to accept capture so chose to leap to their death from the face of a cliff. The families of the lost warriors wept for their loss and each tear shed turned to stone as they hit the earth. The legend promises that because the warriors’ families wept their sorrows into the hills anyone who caries an Apache Tear will never have to weep again.

The stones themselves range from pea size to golf ball sized and though they can be translucent brown the best examples are a shiny jet black. I didn’t really hold out much hope in finding any since this place is so well known but the hunt intrigued me and really pulled me in. I kept my eyes to the ground and before I knew it there it was. With a quick brush to remove the dust there in the palm of my hand was the lovely shine of a small jet black stone. Bill had not seemed all that interested but began looking too and as soon as he found one he was just as hooked. It seemed odd but once we would find one often there would be a handful more. Once we really knew what to look for they seemed to litter the ground. The search was addictive and we could have filled our pockets but instead I kept a handful of the shiniest for jewelry making and a few for gifts and left the rest where they lay in the dry Baja dust. Kat
Posted by Bill and Kat Russell at 12:18 AM