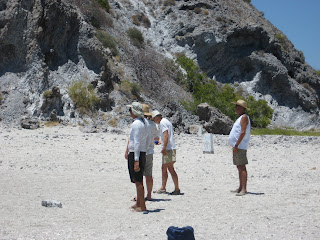 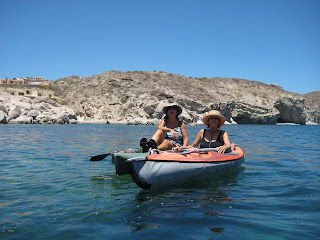 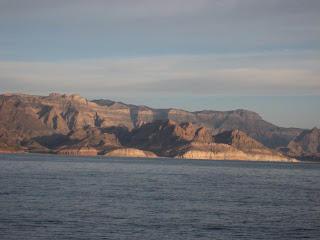 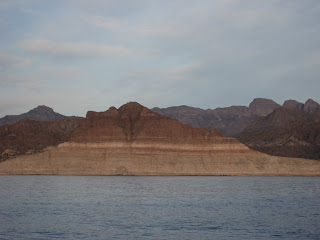 Loreto Fest was a blast. During the Festivals run the Singular Marina at Puerto Escondido was alive with people and activity. But we quickly learned that Puerto Escondido looks completely different the entire rest of the year. After the Festival this lovely marina averages only a handful of boats per day. All the Singular marinas in Mexico are part of FONOTUR, the government’s highly successful foray into turning all of Mexico in to a tourist destination. The facilities boast pretty much everything one could hope for. Here they have a small dock, a fuel dock with potable water, clean bathrooms with free showers (hot water available 10:00am to 6:00pm!) 100+ mooring buoys, a shore boat service, a restaurant and small store, a pool and hot tub, cruisers lounge, a friendly yacht club with an extensive book and DVD exchange, a full service boat yard with a 50 ton lift and laundry facilities. A short but hot mile walk away is Tapui where there is a hotel with a restaurant and a small 7-11 type store. That’s it, there is nothing else for miles. The seaside town of Loreto is only 14 miles away but the $80 cab ride leaves the marina isolated and empty for most of the year. It looks like they had big plans though. Around the marina there are miles of concrete roads and sidewalks, a guard house, landscaped palm trees and block after block of dry scrub, turkey vultures and free range cows, nothing more. Hopefully the rebounding economy will bring some growth again and all the plans and dreams will materialize. In the mean time it’s a great place to throw a party!

You may wonder why I bothered to write about the clean showers. Well the year we got our boat we spent three weeks in the San Juan Islands. I was excited about our first long trip and also was looking ahead to our full time cruising years. I was definitely in a learning mode so every time we talked with other boaters I would ask lots of questions. In a cove near Hope Island I spoke to a couple on a sailboat who were headed home from a month out and asked them a simple question: what’s been the highlight of your trip this year? The answer I got back caught me off guard. “Definitely Dear Island. They have the best showers in the San Juans!” They went on actually gushing a bit and explained that they were clean, the hot water was quick and plentiful and they were free. I had expected to hear about a perfect anchorage or a secret crabbing spot somewhere but I tucked the info away anyway. It didn’t take me long to understand the value they placed on their answer. Finding simple things like a place to take a long hot shower definitely falls into the luxury category for most cruisers. In fact I am still learning the importance of many things that fall into that category: potable water at a dock, good clean bathrooms, laundry facilities where you don’t have to stand in water up to your ankles while you fluff and fold (or better yet here in Mexico I love paying less to have someone else do my laundry for roughly the price I used to pay to stand in a laundry mat and do the chore myself,) a reasonably priced grocery store that isn’t a taxi ride away and quiet anchorages where your neighbors turn off their music before midnight.

We took two trips into Loreto with vans full of cruisers for sightseeing and provisioning and it was worth the price. Loreto is a beautiful seaside town with just about everything you could need. The original Baja mission was established there in 1697 and became the first of 24 missions built in Baja California. In spite of being in total ruins several times over the years it stands proudly now more than 300 years later as a center of the towns’ community. They also have a beautiful town square surrounded by stands of huge mango trees. In fact there are mango trees all over the city. The fruit wasn’t ripe yet but my mouth watered at the thought of the thousands of juicy mangos that will be falling in a month or so.

Once we left the artificial hustle and bustle of Puerto Escondido it was like stepping off into another world. After a short hop to Isla Coronados, we set our anchor and settled in to watch the days roll by. For the first time in a year we have nowhere to go and no deadlines to meet. No one flying in and no long list of things to finish so we can be off to somewhere else. Instead we’ve begun our six month slow down. We broke out the kayaks, grabbed the pool noodle and blew up the floatie toy. The days are warm, the nights are cool and the biggest worry is weather the next anchorage will have bee’s , Bo Bo’s or No See Ums. We have time for a morning kayak around the anchorage with a girl friend or to power through an entire paper back in a day. It has been a great way to ease into the leisure life in Baja.

Being at anchor for days at a time far away from any town opens the days up like nothing else. We of course have projects we could work on but neither one of us seems in any hurry to break out any big projects. At Isla Coronados we had a potluck get together one night and then I went kayaking the next morning with the gals from “Oya”, “Far Country” and “Interlude.” We just paddled around aimlessly, not really going anywhere and talking about our cruising lives and soaking in the luxury of just relaxing. We were just about to call it a day when I saw a pod of dolphins off in the distance. They had been feeding in our big cove off and on all morning and I just couldn’t help myself. I had to try and see how close I could get to them. The harder I paddled the farther off they seemed. Finally I decided to give up and head back towards the boats. I turned again to watch them and saw them change course and head my way. Instead of pursuing I just stopped paddling and just floated along in the water. I sat still and quiet and in a matter of a minute or two they were all around me. Sitting just inches off the water they poured like silver around me. The waters were clear as glass and it felt like I could reach out and touch them as they surged by. I was so close I could hear every breath they took and feel the pulse of the water with their tail slaps as they pushed past. Moments later they were gone and I was alone again sitting in swirling water, their sounds falling off into the breeze.

The next morning we moved just a short sail away to Puerto Ballandra. We had a nice visit with our friends on Ponderosa from Seattle and then spent the next two days sleeping in and fishing. While underway we almost always drag a couple of lines hoping for game fish but this is a different kind of fishing all together. In fact in the entire year we have been gone this is only the second time we have set off in the dinghy to fish. It was already hot but we loaded up the dinghy with everything we would need and headed for the rocky point at the entrance to the cove. There was no finesse really in what we were doing just experimenting and trying different things but in no time we had three nice rock cod (I caught all three thank you very much.) fish tacos for dinner! The next day we loaded up with sunscreen and set out again. We left Island Bound with our trolling gear out and within minutes I caught a very weird looking fish. It was shaped like an eel but with fins and was about two feet long with very big sharp teeth. Maybe he would have been fine eating but he was just too nasty looking to serve for dinner so off he went back into the blue. We trolled the point for an hour or so and in the end we had three fish (all of which I caught -not that I would rub that in at all of course.) We had to consult our fish books to learn one was a rock cod, one was a small barracuda and the last was a rather exotic looking reef fish with a fan like tail and two colorful stripes. They all found their way to the BBQ for more fish tacos with enough leftovers for coconut fish curry with brown rice.

The next morning Bill decided he was bored and so we raised the anchor and set off for Caleta San Juanico. We learned after arriving that Puerto Ballandra is known as Puerto Beelandra. So between the bees, the horse flies and Bo Bo’s during the day and the swarms of No See Ums at dusk it was time to look for a new anchorage. Plus Bill was ready to try out some of the fishing techniques were learned at Loreto Fest. We tried all the tricks but in spite of high hopes, a fancy cedar plug lure, a green and orange squid, a fluffy, sparkly pink feather and a teaser bottle (a pop bottle full of beads and tin foil pieces you drag close along behind you) we were royally skunked. Oh well, there is always the next passage.

Other than the fishing which does takes some work these last days have been very easy and lo key. We slept in, read, swam, baked my first ever sourdough bread and took the time to listen on the Ham. The Sonrisa net comes each morning with weather and news and then in the evening we tune to the Amigo net for the evenings updates. Both Bill and I become Ham operators before we left Seattle but then in because the internet it more familiar we didn’t touch our SSB radio for most of year. Once we are proficient the Ham will let us stay in touch no matter where we are and will be crucial in our ability to monitor weather in the isolation of the Sea. Next spring when we cross the Pacific – roughly 25 days and probably our longest ever passage-the Ham will again be one of our most important tools. Bill has already learned how to get our weather via GRIB and we are starting to use our sailmail email account but it will take me some time to be comfortable. The ICOM 802 has all sorts of buttons and functions to learn and there are rules to remember and lingo to practice. For me the hardest part is getting over a sort of vocal shyness that sets in when I key the mike. Suddenly miss chatty sounds tongue tied and mumbly but it’s our ticket to the outside world so it’s time for practice, practice, practice. “This is KE7MZh signing off. Kat
Posted by Bill and Kat Russell at 11:55 PM