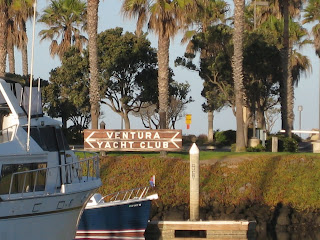 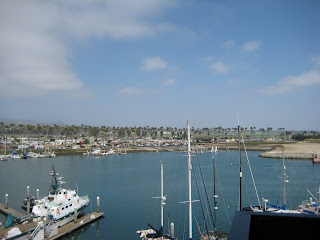 This morning we headed out for points south. Our next destination is Catalina Island but we will make at least one stop on our way as Catalina is nearly 70nm sw. Our stay in Ventura was very pleasant thanks in no small part to the warm welcome we received at the Ventura Yacht Club. They welcome yacht club members from outside yacht clubs through a reciprocal program which means as members of the Washington Yacht Club our moorage there was free! The only other available marina here in Ventura is $66/night. We stayed 5 nights so it was a big savings for us.

They were friendly and helpful from the moment we tied up to their guest dock. We were invited to a live aboard potluck one night where amazingly we ran onto a cruiser we had met this past summer in Elfin Cove AK. Then I met Bonni Duncan who generously offered to drive me across town to have our propane tanks filled AND chauffer me anywhere else I needed to go. We made the circuit including the grocery store, Target and the U-haul store for propane and chatted happily along the way. She was a great help and definitely went way above and beyond the call of duty.

Wednesday we were invited to come join the fun at their Wet Wednesday race night. We happened upon the last of the summer series so in addition to the great meal of cheese enchiladas, pork Colorado and rice and beans we got to share in the festivities of trophy night and the final series’ good natured rivalry and team one-upmanship. I have to say too that I was especially impressed with the apparent friendships we witnessed there that included at least four generations all laughing and talking and having a great time.


Getting a ride to the propane store turned out to be more than a convenience. First because it was 6 or 7 miles away and second because when we got there the attendant was unable to fill our brand new horizontal 20# tanks. He said he had had a problem filling horizontal tanks the only other time he had them. He ended up sending me down the road after a dozen tries. The next place had the same problem but eventually managed to get 6 ½ gallons into the tanks. Add a call to the manufacturer onto our list of things to figure out before we get too much farther south.

While in Ventura we also finally fixed our ongoing battery problem. Part of the reluctance to make the big fix was the dollar amount required to completely replace the battery bank. We pulled out a bank of batteries in April that had come with the boat. We made the decision to replace them thinking we were being proactive by taking care of a potential problem before we left. We gave away the old batteries and installed $800 dollars worth of new Northstar AGM’s. The new bank should have given us about 600 amp hours of banked juice. By the time we were in Glacier Bay we were lucky to get 100ahs. So after less than 6months of use we rode our bikes 7 miles into Ventura and began shopping for batteries.

We also took the step to hire an electrician to come aboard so we could be sure there wasn’t any inherent problem with our system that would cause the same problem farther along. The electrician checked out all of Bills work and gave us the green light. The new batteries were shot. Boat electrical systems are rather intricate and ours in no exception. We have one system aboard that is 110 just like your home but it only does duty if we plug in at a dock which we rarely do thanks to our solar panels. The rest of the power aboard is 12volt. We generate that through four solar panels and an extra large alternator on our engine that generates power while we are underway. In addition we have an inverter that converts our 12volts into 110 to use for running a drill or the Dremmel or for charging things that plug in like the lap top or the cell phone. We also have a small Kubota diesel engine that can be run to generate 12volt energy -it uses a pitance of fuel compared to running our main engine- and also runs our water maker so we can use it to top off the battery bank. Oh and we also have a separate battery just for starting the engine. It doesn’t run anything else just starts the engine. So, all of those different components are tied together so we can get the power we need to run the fridge, the stereo, the lights, the engine, the watermaker, and all of our navigational equipment like our radar and our chart plotter.

After months of worrying we decided to go for the gusto and replaced them (again) with $1400 dollars worth of top of the line Life Line AGMS. So far it looks like the problem is gone. But on their way out the old batteries left a legacy. The batteries themselves weigh about #80 and we had four to remove and three new ones to install. In the process Bill managed to drop one on the index finger of his left hand. The weight actually caused the finger to burst at the seams. He will definitely loose the nail but it looks like the finger isn’t broken.

Now we are sailing under a bright blue sky headed towards Marina Del Ray. The plan for the immediate future is to work our way through a list of things we need to do before we hit Mexico. We need to obtain our Mexican radio license and work on as much of the entrance paperwork as we can prior to our arrival. Hopefully that will simplify check in when the time comes.

For now though the marine park near Avalon is calling to us to do some more diving. So, will write soon and maybe will even have some underwater photos to share. Till then enjoy the fall. Love Kat
Posted by Bill and Kat Russell at 5:23 AM