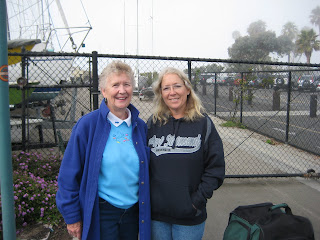 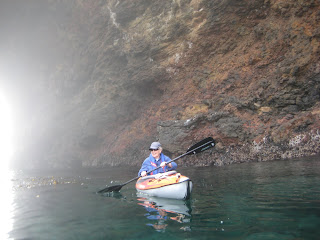 Time sure flies. When mom got here Monday it seemed like six days was a wealth of time. This morning we are already on our way back to Santa Barbara in order for her to catch her flight back to Seattle tomorrow.

The weather when she arrived was typical SB afternoon; fog blown out to the channel, soft blue sky and just enough warmth to get you reaching for your tank top and shorts. The trip across to Santa Cruz the next day was lovely too, just warm enough and lovely 10knot winds. We sailed through blue sky and occasional dolphins all the way to Pelican Bay.

We spent two nights in Pelican. It is a good anchorage, relatively easy to tuck in behind the point so as to minimize the western swell. We put out a stern anchor and it helped keep the swell clean on our nose. The weather when we arrived was warm enough to break out the hammock but the fog crept in and most of the rest of our trip was foggy and cool.

Mom and I kept busy visiting. We talked and talked and talked some more then took a break to read but soon found something else that needed talking about. When we ran out of things to talk about (yea right!) we went exploring in the kayaks. We managed to make it into the yaks right from the boat though I know we had Bill worried that mom was going to end up sputtering in the cold bay. She is surprisingly nimble for a senior citizen!

Santa Cruz Island is wonderful to explore and beautiful in its unfamiliar southern California-ness (and such a striking difference from our summer in Alaska and BC.) The steep cliffs make perfect homes for so many of the sea birds and the rocks and sea held many more species. We saw numerous types of gulls and herons, oyster catchers, raptors, bald eagles, grebes, cormorants and of course the California brown pelican. The surrounding sandy beaches and draws are filled with and luscious succulents and a host of trees, creepers and climbers that we couldn’t identify. We saw prickly pear and cactus, trees that looked like magnolias and others that looked like willows.

Just west of Pelican Bay lay an arched tunnel amid the rocky cliffs. It was open enough to easily kayak through and I had been hopping to get a chance to investigate since I had seen it and mom was willing to go along for the tour. So, we headed out of the bay and around the point the kayaks easily skimming over the thick kelp beds. We saw acres of sea anemones, urchins, and piles of star fish that cling to the rocks just along the rushing tide line.

We were soon joined by harbor seals that seemed curious enough to follow along as we passed through their homes. One baby harbor seal got ruffled when I closed in to take a photo. He wriggled himself back into the sea then let out a raspberry of breath as he slipped below the surface. Or at least I thought it was a raspberry blown in disgust at having his sunning session interrupted. Then as I paddled on though I first saw and then smelled his response to being interrupted, seal pooh is truly nasty stuff!

Once back at the boat we had to reverse our boarding acrobatics to get out of the kayaks and back aboard IB. It takes an interesting ability to first roll to ones knees then hang on to the fender step as you pull yourself to a standing position. While doing that you have to be sure to keep the kayak steady underneath you or your legs go one way and the yak goes another leaving you either in the water or dangling on the side of the boat while your kayak escapes. We both managed to get back on board with no dunking and no hoisting required. (There is much to be said for moms’ active life and her many years of regular dog walks.)

The next morning we took another kayak trip while the bay was still and shrouded in fog. After two days of smooth seas the water in the cove was extremely clear. We could see lots of colorful fishes and could see the seal pups as they swam by. The second trip we talked less and listened more and it was fascinating to hear the water as it roared into and out of the cracks in the cliffs. A whooshing roaring rolling noise that sounds almost alive.

After our kayak trip we loaded up and headed west to the anchorage at Cueva Valdez in order to stage for an early trip to Painted Cave the next morning. The hope was to leave IB at a temporary anchorage in the calm of the next morning while we explored the cave by dingy. Instead we spent the night rolling in a fog filled bay while the weather deteriorated until we had to cross the cave expedition out of the picture.

A word or two about open road stead anchorages: We who are from the Pacific Northwest are terribly spoiled. There are so many anchorages available to us that it is nearly always possible to find a place to tuck in out of any weather. Other than the storms we have been through the only time we have ever spent in a rocking anchorage in Washington was when we anchored near a ferry route. With the ferries you rock and roll for a minute or two on a regular schedule then return to the calm until the next scheduled run. As are all the anchorages on Santa Cruz, Cueva Valdez was wide open to the west, little more than a small bight to hide behind. As the wind increased the west swell did too. By full on evening we were rocking pretty hard. By dark we were galloping along. Sleep came in bits and spurts until the next big wave hit. Over time we swung more and more to our side until we were in fairly constant motion side too and constantly tugging and pulling on our anchor chain.

We were all in bed sleeping fitfully when I heard mom call Bills name. She had awoken to the noise of the anchor chain banging in some pretty violent swells. Looking out the window she could see nothing but cliff and bright lights! As we slept fishing boats had pulled in right next to us. They had all their deck lights on and the false brightness lit up the fog and the gloom and seemed to make the sound of the heavy surf magnify against the rocks and the caves in Cueva Valdez. It looked and sounded as though we were about to be swept into the rocks.

My mom loves the boat and is quite a sailor. But she is not familiar with the sounds and the feel of a reeling ship in rising weather. She had been sound asleep and was momentarily disoriented and the response was true fear. Frightened and still half asleep she called out in worry.

In a matter of moments Bill and I were up on deck. Looking back we probably should have put out the stern anchor when we arrived, but right now sure seemed like a good time to see if we could decrease the pounding. By now it was pitch dark and there was a 3 to 4 foot swell rolling into the anchorage. I rushed to get our trusty storm anchor ready while Bill tried to climb into the bucking dink. I was glad it was him and not me because it really took some timing and finesse to climb in under those circumstances. Once in the dink he moved hand over hand around to the opposite side of the boat where I handed him the anchor already shackled to 300feet of heavy rode.

Being careful to keep the rode out of the now running dingy engine he angled his way off the stern towards the beach to drop our priceless Fortress over the side into about 15 feet of water. Then as he worked through the rolling surf back towards the boat I pulled in the excess line careful to try and keep the line out of the little outboards propeller. Getting back aboard IB was just as hard, wind blowing, swell rolling, the pitch darkness encircling the bright glow thrown by our spreader lights.

With a bit of good timing Bill was soon aboard and pulling the excess rode tight to point our bow straight into the swell. The stern anchor gave us a much better ride but still we bucked and rolled for several more hours. Mom and I tried to sleep but Bill was wide awake and kept watch until finally in the wee hours the seas stilled and we all got some much needed deeper sleep.

By morning the swell had again increased and at 730 with a sleepy crew we decided Painted Cave was not in the cards for today. It would be too difficult to get three people into and out of the dingy for the trip and the kayaks were a certain no go. So we sleepily took advantage of the relative mild swell to reverse the process and bring in the now deployed stern anchor, raise the Rocna and head back to Santa Barbara in the fog.

I was busy writing this and day dreaming about getting some laundry done while close to the laundry mat, the luxury of a possible dinner out and how much I was going to enjoy my sleep tonight when mom suggested dinner on her at Brophey Brothers Seafood! Thanks mom, it will be a great end to a lovely visit!

xoxo Kat
Posted by Bill and Kat Russell at 12:22 AM