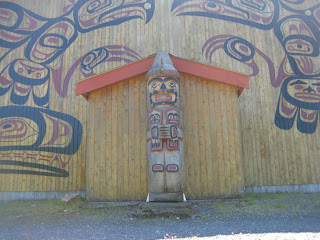 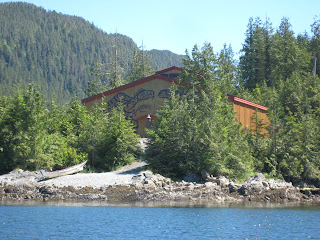 Today we motor along under deep blue skies towards Shearwater BC. We are hoping to find a spot at their small dock so we can use their WiFi and send some emails and blog updates. Since Prince Rupert we have been backtracking through familiar territory. Yesterday though we stopped for the first time at Klemtu. It is a native Village of about 425. We found a spot at their visitor dock (we were the only one there till late in the evening.) There was a sign telling us to check in with the Tourism office but the door was locked and it turns out there hasn't been anyone there for a couple of years.

Our first walk through town led us around the bay and into the older part of the village. We met a group of missionaries who were getting wood cut and a fire pit ready for an evening "sing song." The whole group chatted us up and then a woman from their group gave me a gift of a hand knit wash cloth before heading off for their lunch. As we walked away from their group we began talking with a local artist. Jeff is self taught, started by copying comic book characters in school and now does beautiful styles native designs in acrylic on sketch book tablets. He had a portfolio of a dozen or more original drawings. We talked with him for awhile and bought one with an Orca over a black, white and red stylized killer whale with interior depictions of the eagle, wolf and raven- the four crests of the villages two bands all surrounded by a bright blue border. He showed us where the band office was and told us who to contact to arrange for a tour of "The Big House."

Later in the afternoon we took the dingy across the bay to the Big House. We soon met Doug who has lived most of his life in Klemtu. He now works in the Klemtu tourism office. After welcoming us we stepped into the dimness of the gorgeous new Big House. He gave us back ground on the two separate bands that live in Klemtu and told us the story of how it came to be here in this tiny town. The Big House was built in just under a year but it took more than 10years of work through the specifics of design, size, placement and how they would represent both separate bands culturally. A master carver was hired who then worked with local carvers to do the four stunning poles inside the house and the other carvings and drawing through out. The house is used by the whole village for potlatches, weddings, funerals and other marks of life. The most important aspect of the design was to find a way to incorporate the two distinct native cultures who live in Klemtu. He also shared a number of the old native stories to go with the poles in the house along with a wealth of other information about life in Klemtu. His job in Klemtu includes the tours giving tours to people like us who show up and ask along with mounds of paper work at the band office and then in summer he takes visitors on grizzly tours and tours of the local cultural sights.

Afterwords we did the requisite shopping and then a couple of loads of laundry. Laundry is always an interesting undertaking while underway. In Klemtu we were lucky enough to think to ask about the laundry earlier while at the band office. Turns out there was no propane at hooked up. They offered to go hook it up for me so off I went.

First I needed to find out how much change I will need. Seems easy enough but finding the right change for the machines always seems to offer a new adventure. In Klemtu the trick was that the whole town runs out of Loonies( Canadian 1$ coins.) I needed 12$ to do two loads but the grocery store only had 5 in their till. Then we went to the restaurant and they only had two. The cook overheard the hunt and quickly came back with more than I needed (after I was done I walked the extras back to the grocery instead of taking them on with me.) Then once I had the change I needed to figure out the peculiarities of the Klemtu machines.

The washers looked good and they worked fine though one of two identical machines inexplicably took 30 minutes longer to finish the spin. Then off to the boat to work on some buns for dinner then back and on to the dryer. Doug had assured us the propane was hooked up but when i payed the first machine i got nothing. So i tried machine number two. No problem I will do the drying in turns. But dryer number two didn't turn on either. Bot one to give up easily I checked the plugs. OK. Then opened the breaker box. Every breaker flipped to on except the dryers. Walla'. But.....the door on number two doesn't close and it doesn't turn off when the door is open. Luckily someone had used some duck tape and there was still enough stick for my needs. The trick was getting the clothes to stay inside long enough to get the door closed. Off to the boat to finish the buns. Then back only to find out that the clothes in the top dryer are done but the second is still wet. get the dry clothes out of the taped door while still spinning away then stuff the wet and slam the door. Finally, once again the laundry is done!

Everyday a new adventure. Love, kat
Posted by Bill and Kat Russell at 2:05 AM