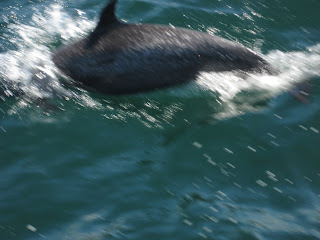 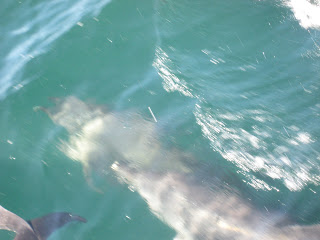 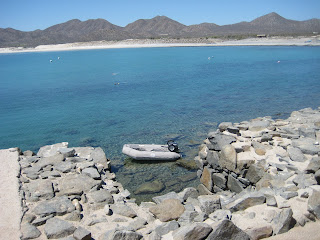 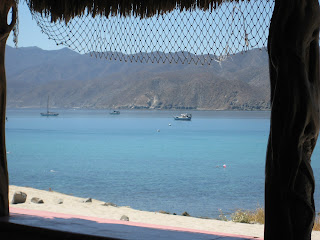 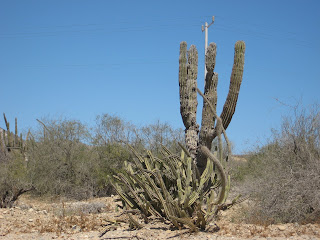 We are now in the Sea of Cortez and it is stunningly beautiful. There is nothing new really. The dusty dirt roads far outnumber the paved ones and everything has a sense of long hot days. But here in Baja the mountains surrounding us often shear sharply into the sea. The hills are shades of brown, black, red and yellow and the waters shallow fast into shades of blue and aqua. Everywhere you look it is pure desert with cactus far outnumbering the palm trees. The people still are speaking this new language we are struggling to learn. The dirt roads and paths surrounding the stereotypical adobe homes lead into towns that bustle with activity and the conveniences of modern life. La Paz is a modern and relatively large town but it feels as different from Mazatlan as Mazatlan did from la Cruz.

We had an easy and uneventful passage up from Mazatlan. The sailing was decent though the wind could have cooperated some by clocking around behind us a bit but hey free wind is free wind. We arrived at Bahia de Muertos early in the morning after sailing through two nights. After a short nap we jumped over board and finished scraping the bottom clean accompanied by hundreds of fish who swam below us waiting for the bits of barnacle and green slim we were raining down for them. We have refined our snorkeling technique: deep breath, dive, scrape, swim, spout and gasp! The plan is to try and dive the boat every week so we can stay on top of the job. Now that the water is warming it should be much more enjoyable.

Bahia de Muertos (Bay of the Dead) was so enjoyable we stayed an extra day so we could snorkel the nearby coral garden. The water is still a little cold, about 66 degrees but we both have shorty wet suits so we didn’t freeze. There are very few places in the Sea that have live coral so it was an unexpected treat. It was alive with fish and there was plenty of sun to soak up when we were done. Bahia de Muertos by the way is being systematically renamed as Bahia de los Suenos(Bay of Dreams.) I guess the big wig land developer thought Bay of the Dead was too depressing.

We left the bay for La Paz at 3:00am in order to catch a good tide to help sweep us through the Cerralvo Channel. We hoped to get a spot at one of the marinas so it will be easier to have guests but when we arrived after a 10hour passage the current was running so fast that we decided to drop our hook out in the anchorage until slack tide so we could get into a slip. There must be 4knots of current running sideways through the marina here! Oh yea, guess what? We finally found the heat. It was 93 today and as we made our long passage we found barely a breath of wind.

La Paz feels different than the other towns we have visited. It’s my experience that the human brain sort of shorts out and expects that the way life is is the way it will be. So when we travel we get a false belief that seems to expect each place to be basically like the last. But, here just like everywhere in the world each new place has a totally new life to it. La Paz’s is almost tactile. I wont really be able to qualify that statement until we have been here a while I suppose but it has a very different and new feel. Maybe it’s the heat? Downtown La Paz is bustling. The malacon is just a few blocs from our marina and was full of life last night as we searched for something cold to drink. We don’t have much of a lay for the land yet but we were surprised to see very few tourists other than a few handfuls of other cruisers.

Here is where we begin running into the other cruisers who we will be spending the next six months with. The pack has broken off now. Some have left heading to the South Pacific. Others turned due south for Central America. The boats here are either getting ready to bash back up the coast to California or plan on spending the entire summer inside the Sea of Cortez. There is a very active and involved cruisers network here and they seem very organized and settled. There is a little for everyone. Announcements filled the daily “net” with activities ranging from yoga to volleyball to a daily coffee hour at Club Cruceros – the local quasi yacht club. They try to keep us up-to-date on the local happenings and cultural events as well as the opportunities to help with some local community charities. So, other than a trip south to meet my sister and my mom we will be here in the Sea until November 1st. I will be great to have a chance to really get to know all the nuances of this place and slow down enough to really get an appreciation for the beautiful Sea of Cortez..

The kids (Josh and Dianna along with cousin Ryan from St Louis )drive down from Santa Barbara on Monday so we will spend the next few days getting everything ship shape and hauling groceries before taking the off to the islands for some hot weather fun. Hopefully we will still have some time to get our bearing in town too. Kat
Posted by Bill and Kat Russell at 6:18 PM