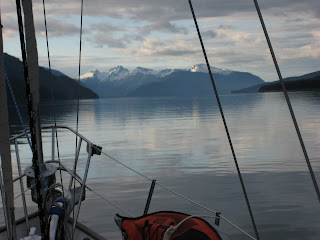 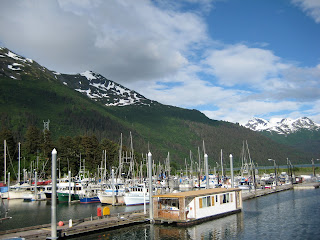 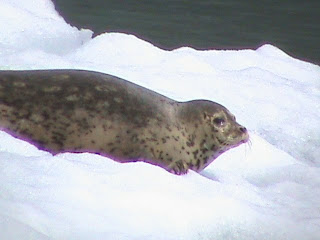 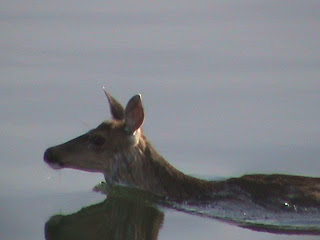 Bill is the King of mechanics and a world class figurer-outer. We now have heat and hot water and the little outboard works too.

We pulled into Juneau Tuesday after a bit of re-planning. It turns out there is a fixed bridge across Gasteneau Channel from Juneau to Douglas. The bridge is 50ft tall per the book and 68ft tall per the harbor master (at a zero tide.) We are 63 feet tall and it wasn't low tide. So we are in a slip in Douglas on the south side of the bridge. it is actually quite lovely and not the cruise ship hell that Juneau can be this time of year. Douglas is quiet and rural and there are no amenities really. There is water and power at the docks but no shower, no grocery, no laundry. Juneau is 3 miles away.

We were her no more than 10 minutes when a fellow on the dock came and introduced himself. His name is Jack and he lives aboard here in Douglas. (Great town.) He has been a wealth of information and also immediately offered the use of the washer and dryer at his daughter Shannons' house a few blocks away. So our first night here I took my little cart full of laundry to Shannons' while Bill fixed the outboard.

As i walked out of the marina parking lot a woman stopped and asked if I needed a ride. (Great town.) After telling her I only had a few blocks to go she insisted so off we went. She helped me find the house....907 was all I knew and dropped me there. I knocked on the door and a sort of bleary eyed man answered. I told him that "Jack sent me to do laundry at his daughters house. (I didn't yet have her name.) He looked at me oddly and then said with a note of bewilderment "my dryer doesn't even work." Turns out I was at the wrong 907. Then I stumbled and knocked over my cart and spilled liquid laundry detergent all over the grass at the bottom of his steps. I stuttered and fumbled and tried to insist on cleaning it up. After protest he went into the house and came out with one paper towel (this is about 2 cups of goo) still insisting that I needn't bother. I kept protesting that rain was coming and that he would soon have three feet of suds in his driveway but he didn't seem worried so off I went. (Great town)

I soon found the right place and was introduced to Shannon who was in the process of moving out of her house with her son Jack. She told me I was welcome and set about finishing her packing and left me there with the laundry in the dryer and the remote control to her big TV. She also gave me her number and said we were welcome to use the place all we wanted...laundry, showers whatever. (Great town.)

Wednesday we set off early by bus into down town Juneau to find the shipping office where our heater parts had been sent to. After working our way around we found the address but there was no shipping office there The shop next door said it had gone out of business more than a year ago. OK, so now we were on foot in down town with no idea where our package was. We first looked for the alternative shop that had taken over some of their business but they weren't open for another 1 1/2 hours. So we hit the pay phone to try and track the package down. Amazingly it only took one call to find out where they had shipped it. It had been sent to UPS as an alternate but when we called them they are only open for business from 9 to 10 am and they are 12 miles out of town in the "valley." The UPS guy said he would be there at 5pm if we wanted to come and pick it up then....so OK. We had some time to wander old town and buy a few t-shirts and I was able to hit a noon AA meeting (Great Town) and then grocery shop before working our way by bus back to the boat and then out to the "Valley."

We didn't know how long it would take by bus or how far we would have to walk from the bus line so off we went. Riding the bus in a strange place is a great way to get to know a town and an even better way to talk with the locals. The problem is that about the time you figure it all out it is time to head to another place. SO, we missed our stop and arrived more than an hour early and were left to sit in the cold wind in the concrete doorway of the local UPS center. But as I write this in our warm and snug cabin, squeaky clean after a hot shower it was worth every mile.


After we were done installing the parts this morning we went into Juneau and attended "Celebration." Its a once every two year gathering of all most of the separate native groups from around Alaska. They come form all around state in their regalia and have 4 days have singing and dancing (the little kids were soooo cute.) There was was Indian fry bread and a juried art show and an exhibition hall with native crafts people. The best part was all the native costumes. I missed a great photo op later while we were waiting for the bus. A couple of native women came by...all dressed in their finery -button blankets sweeping the ground, seal skin boots.....carrying a paper holder full of coffee drinks from local coffee stand back to "Celebration." Old meets new! Wish I had captured the shot.


Tomorrow we leave Juneau and head to Glacier Bay. We were very lucky to score a park pass by phone. We weren't sure we could go because you have to have a permit and we knew we couldn't arrange one until we got close. They only give out 25 permits. 25 boats total not per day. Staggering them as they come and go over their allotted 7 days. They pre-book 15 and then give out 10 on short notice. We were able to slide in on a 6 day pass - if we can check in by 6/7 at 1000am. Its a two day trip, then we have to find an anchorage just outside of the park in order to be there for an orientation at 1000am. If we miss orientation they give our spot away to someone on the standby list. Happily it should be a simple two days there basking in the glory of our warm cabin!
Posted by Bill and Kat Russell at 4:56 AM